Does the Recent Inflation Point to Recession as Well? 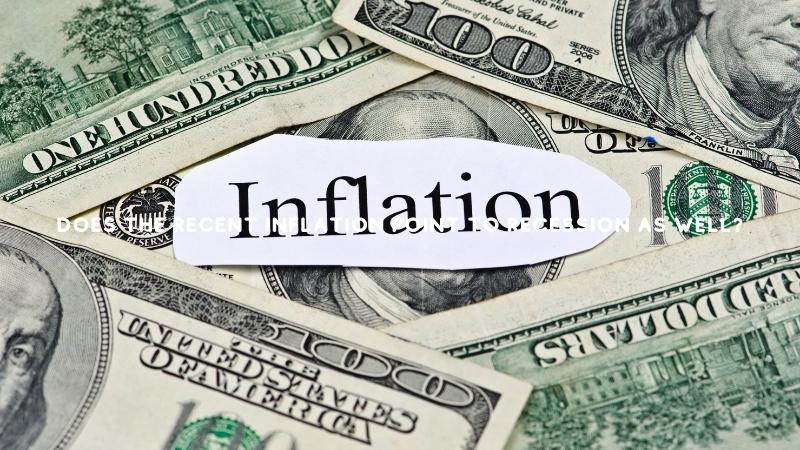 We need to look at what’s happening.

If you pay attention to the recent inflation in the finance market, then it is probable that you will say it is something you don’t like.

As a matter of fact, nobody likes inflation.

But considering the post-COVID-19 scenario and the reopening of offices and the restarting of businesses, it is more than important to look at inflation in a technical sense.

As a matter of fact, inflation has been unexpected by people in general. But financial advisors and professionals are making it a point to do the exact opposite.

According to reports, many finance experts have stated that we can expect a little inflation at this point as that has been made paused for a long period of time due to the pandemic and the closing of businesses.

And that is not bad.

But is it going to affect the professional areas of life?

Guess we are going to find that out pretty soon in this post.

Is Inflation in 2022 Meaning Recession?

We can have multiple answers to that. But we will surely discuss the terms about it first.

This inflation we are talking about is can be an instantly reactive social condition.

Almost in the way, same day payday loan is taken out and then repaid back, inflation can influence us but we may manage it within a short period of time as well.

But there is still a ‘may’ to that.

So whether or not it is temporary or permanent, is a question that remains the subject for deeper analysis.

Experts are saying that inflation is likely due to the increase in supply-chain as the world resumes a normal life again.

The Problem of ‘Stagflation’!

Although economists are not stating that it is the eventual reality, they agree on the point that the influences of this inflation are likely to bring it in.

This probability is intensified more by the Russia-Ukraine War.

The way we see it, the war may not end soon and that can affect the economic structure badly.

Although the European Central Bank Chief Economist Philip Lane proposes that the chances of inflation can come down to a reduced point by the end of this year and that it would come back to its 2% target range in the upcoming years, we still don’t have enough evidence to strongly support the fact.

This is where the probability of stagflation comes into existence.

Stagflation, as economists put it, is denoted as a problematic and complex combination of economic stagnation and inflation. What it means is that economy stays at a fixed and disturbingly static point with no sign of improvement to allow more lucidity while the prices keep on ‘mercilessly’ rising.

This can lead to a recession eventually.

Is There a Chance of Returning to the Stagflation?

The simple answer to that question is 'not much.

It is evident that the Central Bank is facing a type of rigidity when it evaluates its financial status.

What will the European economy do?

Just like you want to assure the most affordable interest rates for short-term personal loans, the European economy would have to try its best to stabilize price inflation.

And doing that is a challenge without damaging the economical actions of a country.

Yes, attempts can be made. But, just like other sensitive dealings; trying to keep prices at the same point without hurting the economy is going to be a thing that needs special treatment and advanced financial plans.

But if you want to control pricing without giving the economy the space it needs, then you might not win the game.

And this has been the same issue with the European economy.

The OECD even took a more prominent standpoint. It refused to declare presenting its economic outlook stating it is not in the position to do something of that sort.

Do We See Something in Ireland?

But that was a year ago.

In 2021, the estimated domestic product expansion has come to a growth of 13%.

But then again, this growth is compromised in the next phases. At the last of the year, this growth came to a drop, which wasn't good news for the economy of the country.

The country has also seen the economic challenges presented by that growth.

In the economical outlook of the Economic and Social Research Institute or the ESRI, the growth GDP has been recorded to witness a reduction from 7% to right above 6%.

Okay, now we might present something that may not sound very good.

According to reports, people have naturally adjusted their living with high costs.

The KBC Bank, Ireland took the inflation rates as a way to find out how much money it can drain this year from the usual consumer spending.

It has been calculated that 2022 is estimated to drain €4 billion from consumer spending.

This means an amount of €2000 per household or family.

Do We Have Any Good News with Recession?

Although the statistics are in support of recession, Ireland is considered a country that may be saved from the clutches of recession this year.

But the situation needs to improve a lot.

Now, the recession might be a highly expected outcome of inflation, and Ireland is likely to be saved from the tension and stress of the Eurozone.

However, we need to see if that happens.

What the Households Will Face for Inflation

Well, the households are going to experience major economical stress due to this inflation.

We believed that the effects of inflation would be confined to the energy prices and to some other products only.

But facts have shown that the price rise has moved towards the department of food, which can act as a serious economic tension to the households.

In order to fight the price rise, an individual or a general employee is in the need of getting his or her wages raised to a certain level.

Inflation will definitely affect the private sector since it did the same with the public sector.

In case you want some more calculations, then reports state that an average employee has to get a price rise of about 10%.

This can be a major issue for a person and the household if the said hike is not given appropriately.

Think of a bad credit instalment loan from a direct lender online.

It is because of these improved financial services, do normal people and businesses still get to tackle problems in the financial department..

But inflation is a problem no one or nothing can solve but humans themselves.

Experts suggest that the increase in workforce and the diversification of the industry can help this problem be more lucid in order to solve it.

What today’s world needs is more employment opportunities and that will surely come at the time there will be enough jobs and projects.

And the first thing we all can do and pray for is to stop the Russia-Ukraine war.

We need to do this because we can do this.